The First of Many to Come!

November 23rd, 2017 – Helping Hand Coalition for Israel (עמותת יד לעזרה ישראל) has been going to Tiberias area for some time now and making friends with many Holocaust survivors who live in the area. Today a first of its kind Shalom House took place with a group of WWII veterans and survivors in Poriya Illit, a beautiful village perched over the Sea of Galilee just south of Tiberius.

The Shalom House was beautifully prepared by a dear German family in their home – Samuel, Claudia and their 7 year old daughter, who cooked a fantastic dinner along with an amazing homemade dessert with chocolate handmade hearts on top! As this was the the FIRST of many Shalom Houses to open in Tiberias (and Galilee area) much HEART , effort and dedication was put into this gathering.

Wonderful music was played throughout the gathering by the translator Oliana, who is gifted with a fabulous voice. She sang in Russian for the Veterans, while playing the piano with her 2 year old son sitting on her lap! Samuel played some wonderful Israeli traditional songs on the violin and piano.

There was also a team from the USA who helped with preparations and contributed to the gathering with lots of love, smiles and one incredible testimony by a member of the team. She shared how God changed her from hating the Jews and Israel to loving them. Many tears were running down the cheeks of the veterans as this life story was told. As she concluded by stating her love and repentance for the Jewish people, there wasn’t a dry eye in the room, including the staff.

The Veterans left the Shalom House with a gift bag, along with lots of joy, hugs, kisses, full of thankfulness and cheer! One of the leaders stated: “Thank you to Helping Hand Coalition who cares for us, and has brightened our day with such a meaningful activity.”

As mentioned , this was the FIRST of MANY to COME! 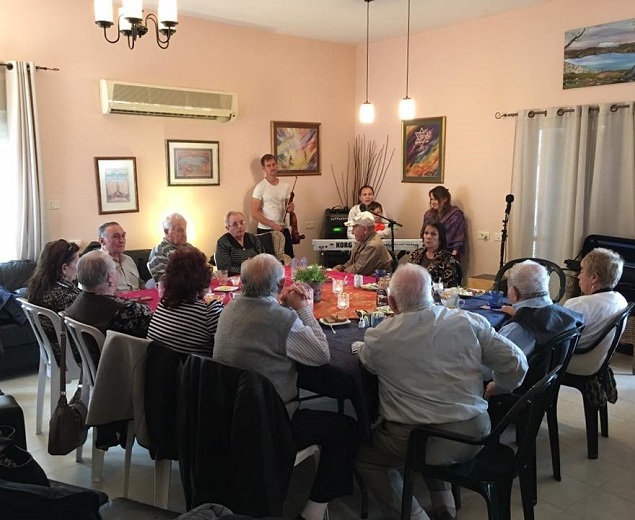 Tagged as: Shalom House, Survivors of the Holocaust