After three days of dark skies and more rain than most roofs in Israel can handle, on January 6th, the sun showed its face, and the skies once again became a glorious shade of blue. 2020 is a year of new beginnings, and to help us welcome in this new decade, seventeen survivors from Beit Cham, located in Haifa and led by Gala, came to the HHC Caesarea Villa for the first time.

Greeting the survivors with warmth and joy, Bozena Gasiorowski, director of the Shalom House Project, began the event by introducing herself and the event’s performers; David Forman, Alyosha Ryabinov, Dagi, and Andrea.

As the concert started, the villa was transformed into a music hall. Serenading the audience with piano and violin, David and Alyosha created melodies that felt as if they had come straight out of a movie.

As David and Alyosha played, Dagi danced to the rhythm of each tune. Whether performing a solo or accompanying the instruments, her movements were silent yet full of meaning and emotion. Each dance was full of passion and hypnotized the audience to watch her every move.

Recently relocated to Israel for her husband’s work, Andrea was invited to come to the event and play for the survivors. Before performing an exquisite piece by Schubert on the piano, Andrea spoke about the composition, creating a deeper understanding of the arrangement. As she played, a bond of instrument and human was fused together with emotion that flowed through each note.

In-between songs, Jody, Alyosha’s wife, came to the front to share about her parent’s immigration to America after leaving Russia and her journey to the Land of Israel where she and Alyosha have lived for the last ten years. Growing up, Jody went to synagogue with her family, but never learned about Israel; however, when she began to read about Israel in the Torah, a desire to make Aliyah and dwell in the Promise Land grew inside of her. Jody said, “I am home, and our hearts overflow as we are with you today.”

Ending the concert with two famous pieces, Amazing Grace, which sent shivers down the spine, and Alyosha’s Hava Nagila rhapsody, the audience let out multiple “Bravo’s” at the musicians’ incredible performances. Then, before lunch was served, Aloysha asked if anyone would like to share a story about their lives. Two women raised their hands and shared powerful testimonies.

Liliana has lived in Israel for 28 years, and though she was born at the very end of the war, her parent’s love story began in a ghetto, where she was also conceived. However, after the ghetto was liberated, her parents had to flee. Running with a group of Jews, they took shelter in a synagogue in Iaşi, Romania, where her mother gave birth to Liliana on the floor. Many years later, Liliana immigrated to Israel and visited Yad Vashem. As she walked around and looked at the relics collected from around the world, she saw a picture of a door that belonged to the very same synagogue where she was born!

Paulina was next to share, and her tragic tale caused a whirlwind of emotions. Born in 1937, Paulina was four years old when the war began. She told the audience, “My first memories are of my family and me in the middle of the war. I felt like my childhood was stolen from me.” Paulina went on to explain that her town was one of the first to be bombed and that her family hid in the cellar before carts came around to take the children away. For the remainder of the war, her family starved and slept either with animals or on wooden boards. They walked many kilometers and were later taken to a tobacco farm to work. She remembers the cold winters, the thirst, and, worst of all, the hunger. Eating anything they could find, Paulina and her four other siblings rummaged to find flowers, roots, and wild potatoes, but it was never enough. When the war ended, Paulina and her family returned home to find that is was destroyed. They continued to starve for three more years; nevertheless, despite it all, Paulina exclaimed that she is very happy to be in Israel, the country her mother wished to die in.

Moved by these testimonies. Bozena thanked the women for sharing their stories and told the group that it is because of their testimonies that Helping Hand Coalition exists. She encouraged the survivors to continue sharing their memories and said that people need to be made aware of what happened to ensure that it never happens again. “Your voices are important!” Bozena stated.

Though not Jewish or from German descend, Donna, a friend of the Ryabinov’s, was so moved by Liliana and Paulina’s tales that she had to share about how her family took part in a smaller Holocaust-like event in America. 150 years ago, her family was slave owners, and they would separate the husbands from their wives and make the children clean their houses. Growing up, Donna didn’t know what a Jew was as there were not many Jews in Texas; but when she was an exchange student in Germany, she learned about the war and the devastation the Jewish people faced. She said, “I am sorry, and I know I am no better than anyone who treated you badly, but I thank you because I see the forgiveness on your faces.”

The rest of the afternoon’s event was more light-hearted, with delicious food being served and conversations sparking the beginning of new friendships. It was a perfect start to 2020, and this was the first of many Shalom House events of this year!

Thank you so much to Gala and her group from Haifa for joining HHC on this clear afternoon. We also appreciate our team and the performers who came to the event to spark love and hope into the lives of the survivors through their talents. Additionally, we’d like to give a warm welcome to our newest volunteer, Terry, who will be helping with the Shalom House and other projects for the next three months! 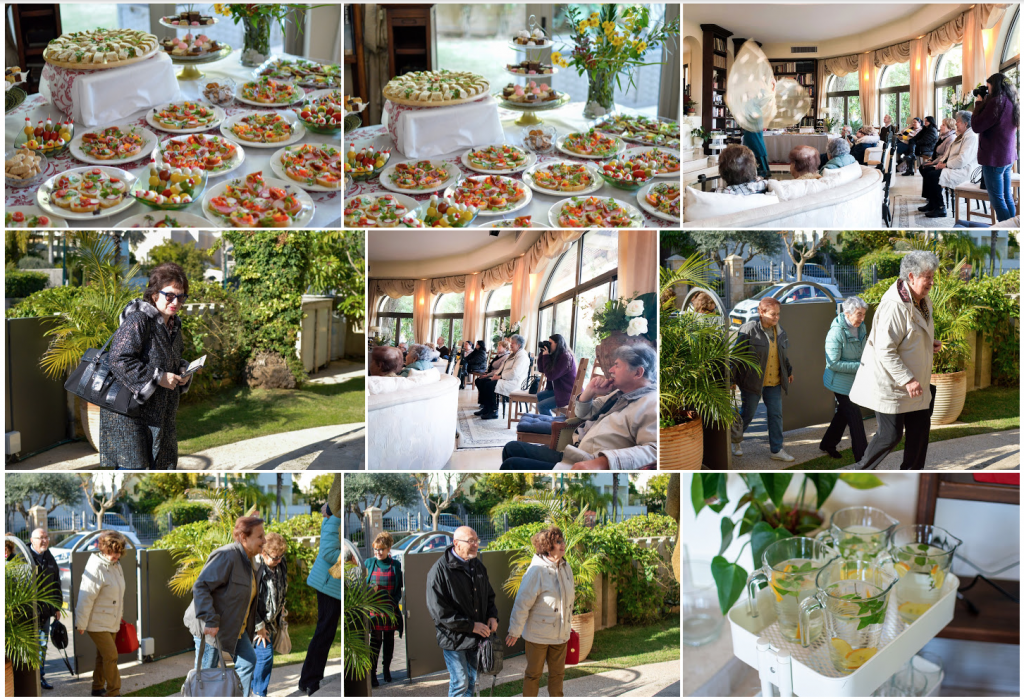 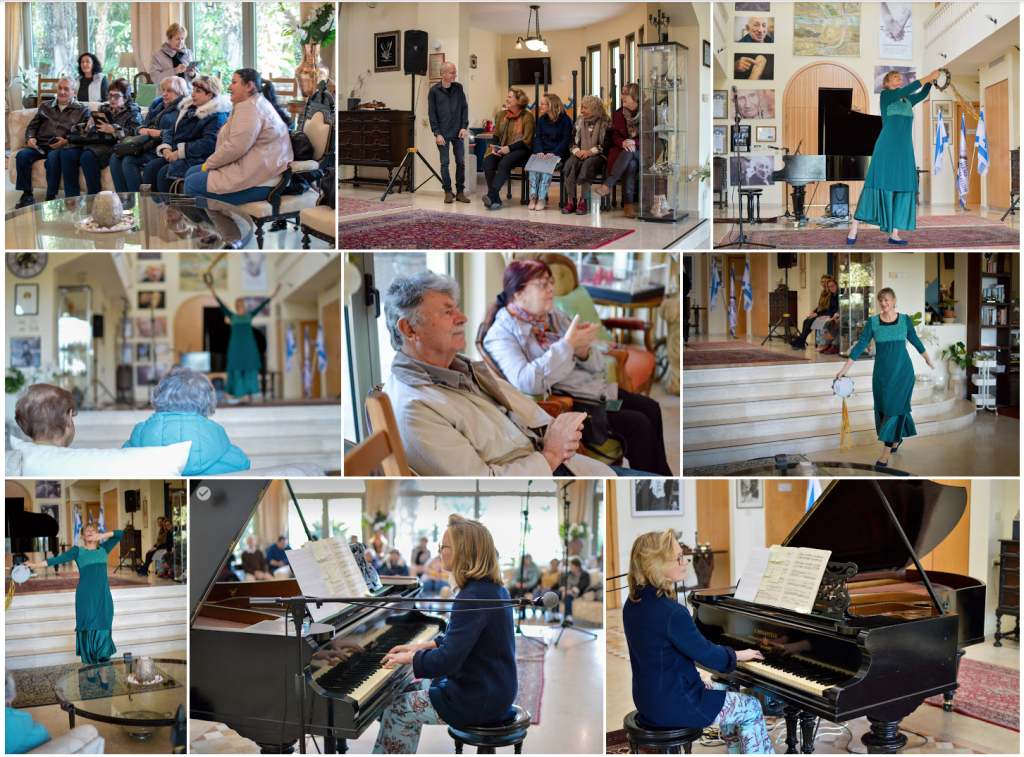 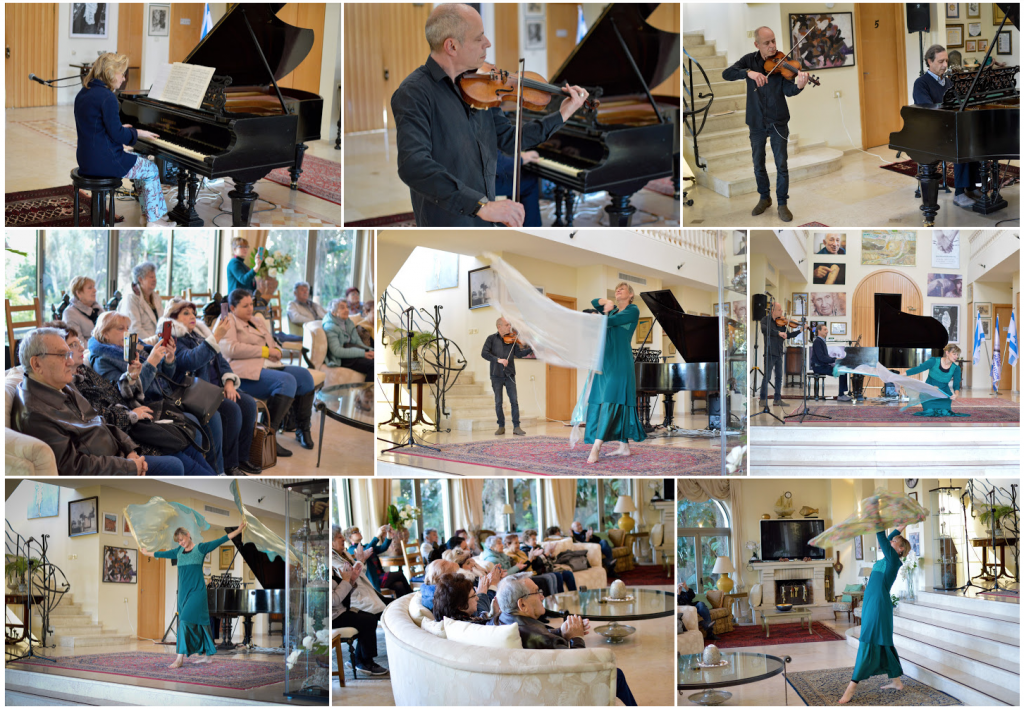 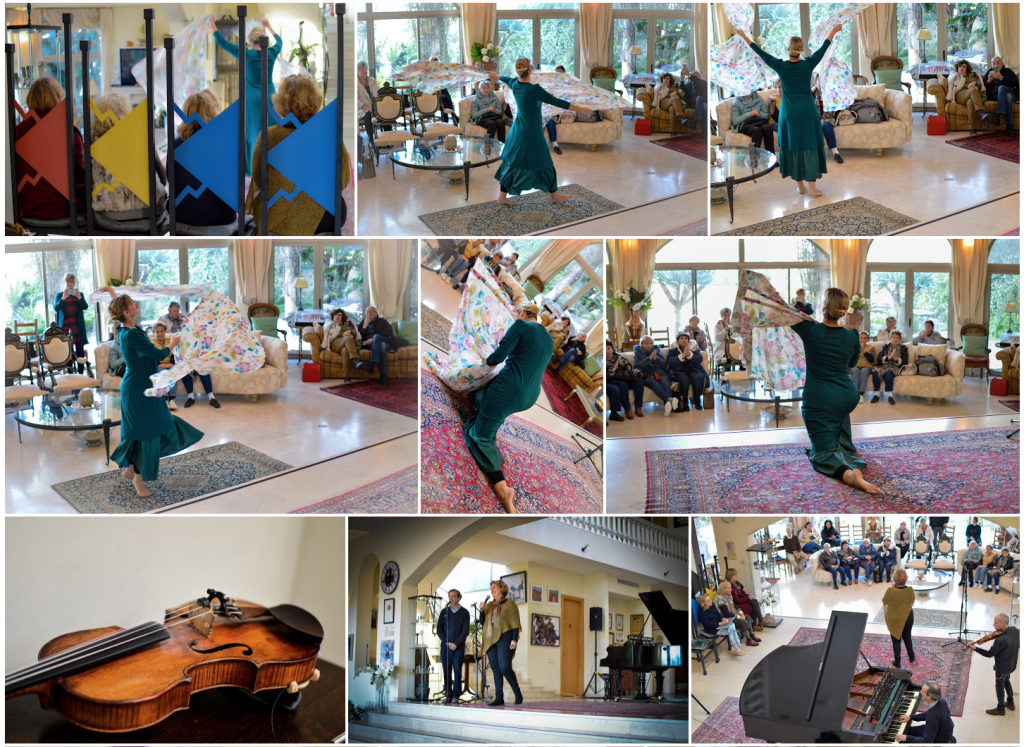 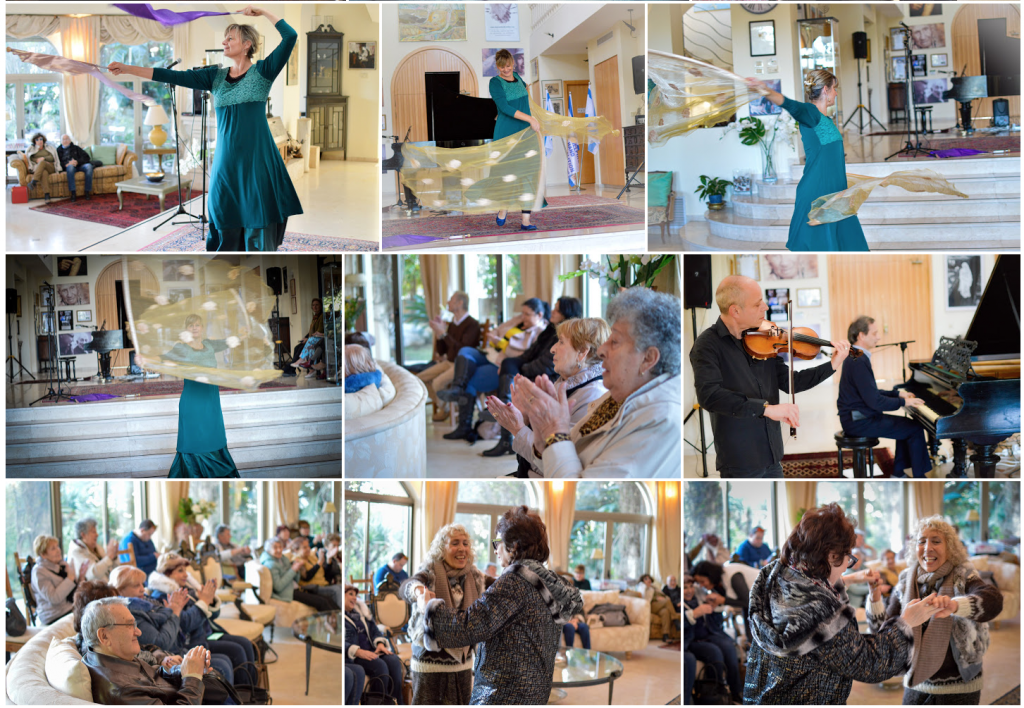 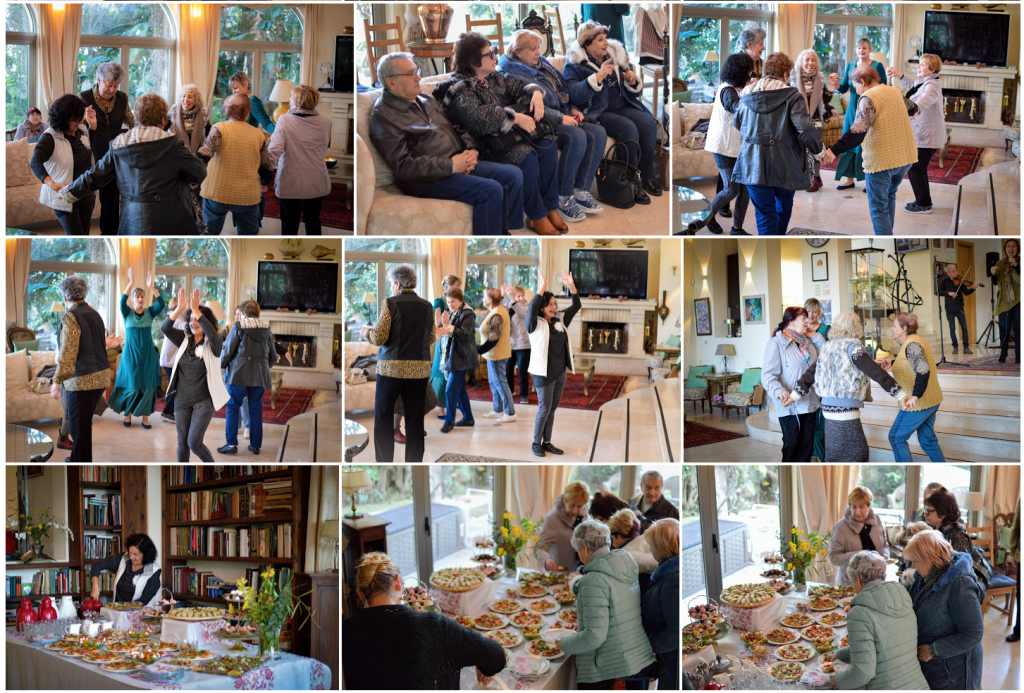 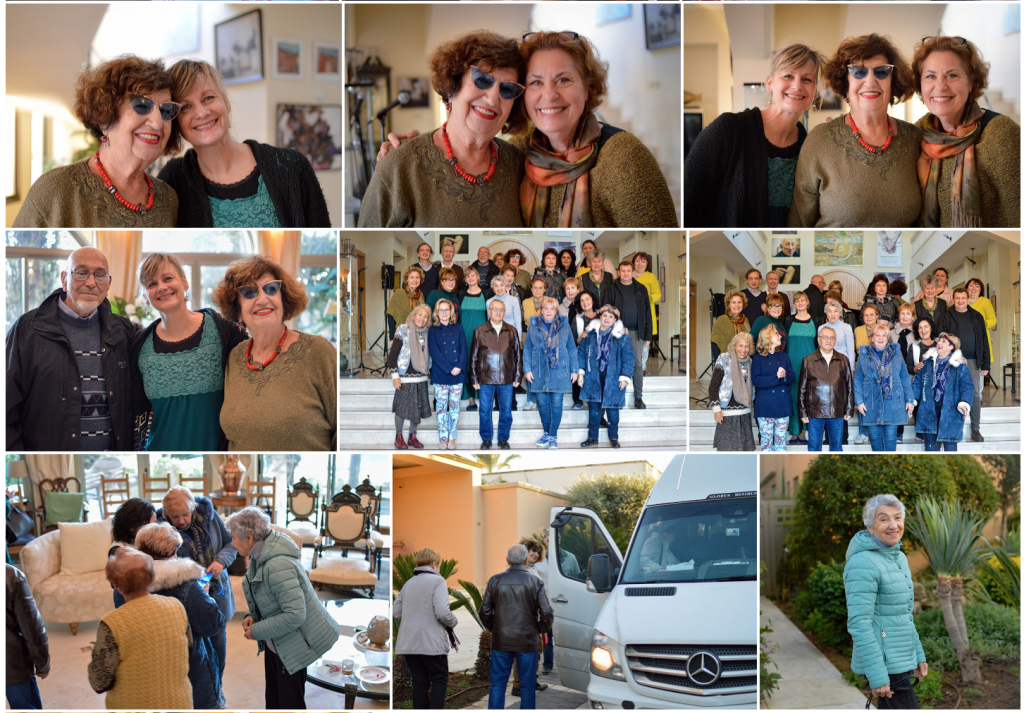